After 37 hours non-stop, for varuious reaons, the crew had to finsih their challenge at Penton Hook.

They managed to raise over £2,000 for their designated charity.

Thank you to everyone who sponsored us and helped in some way. 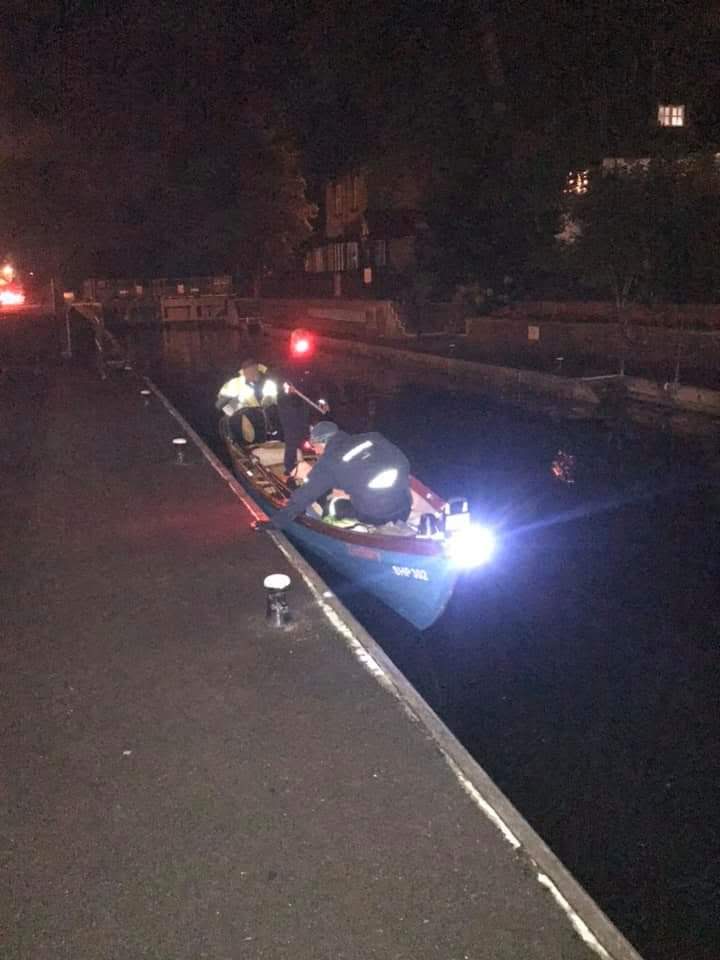 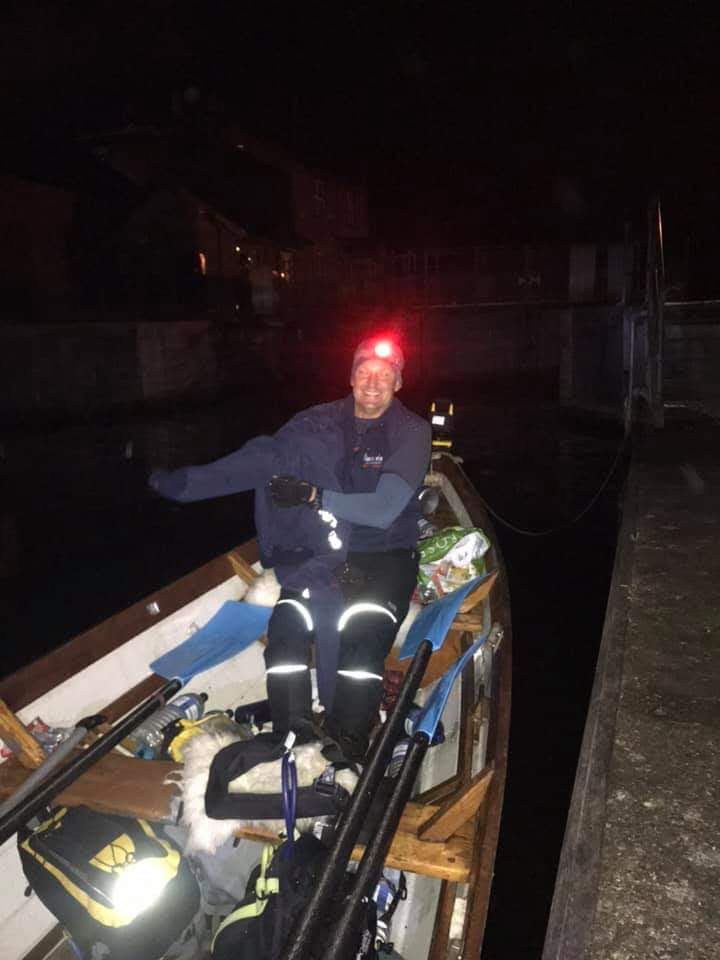 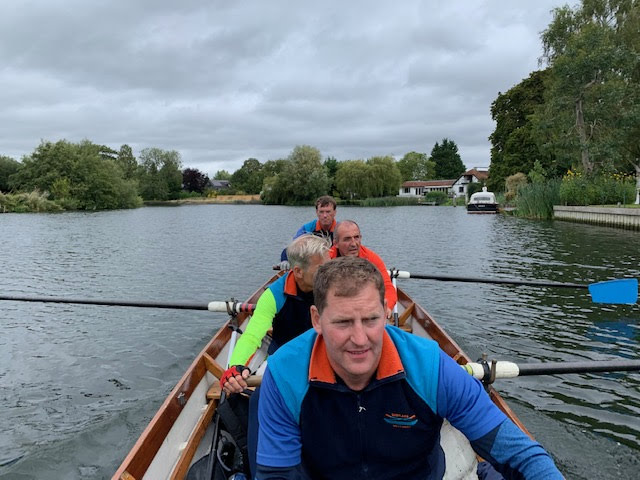 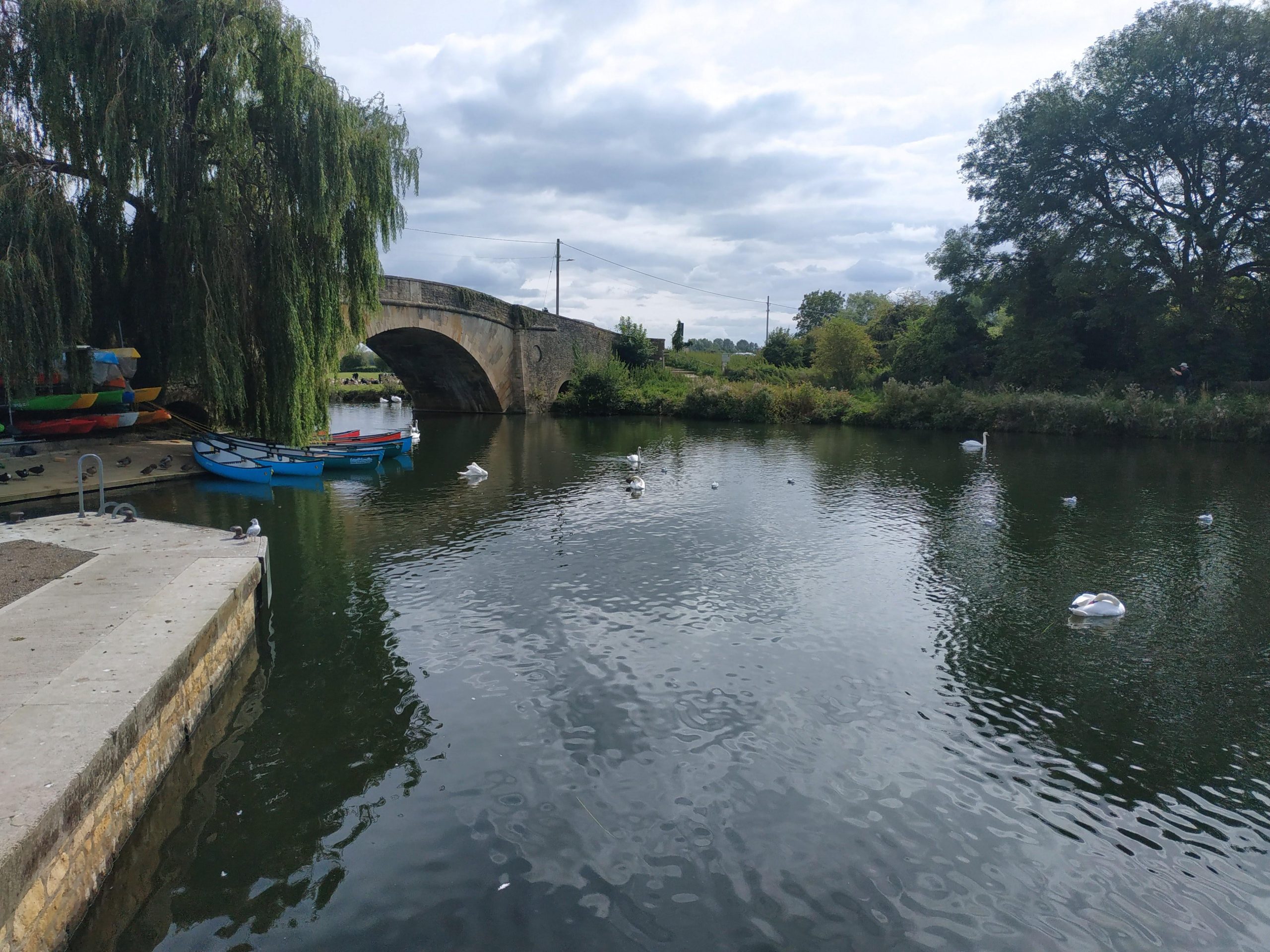 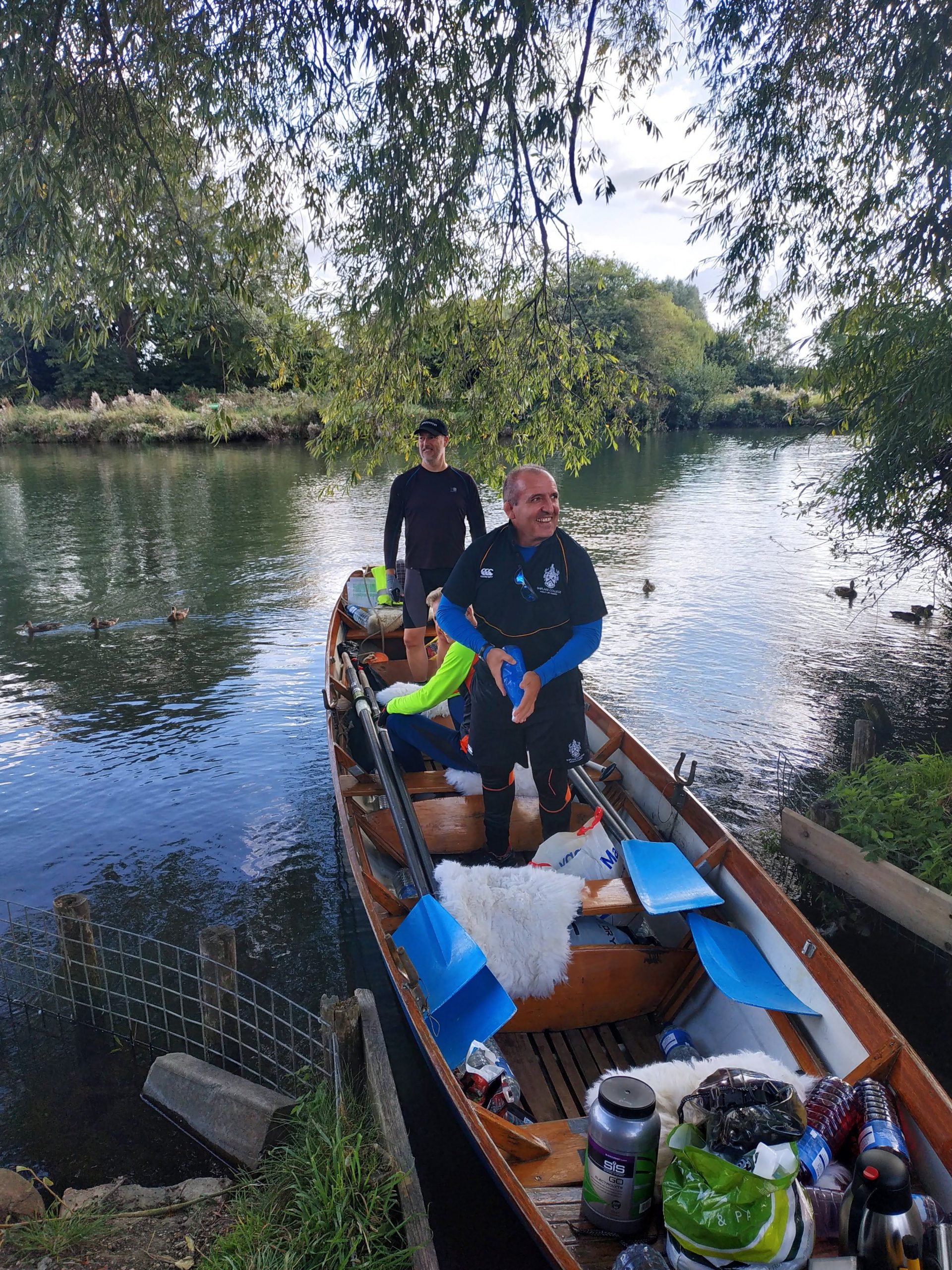 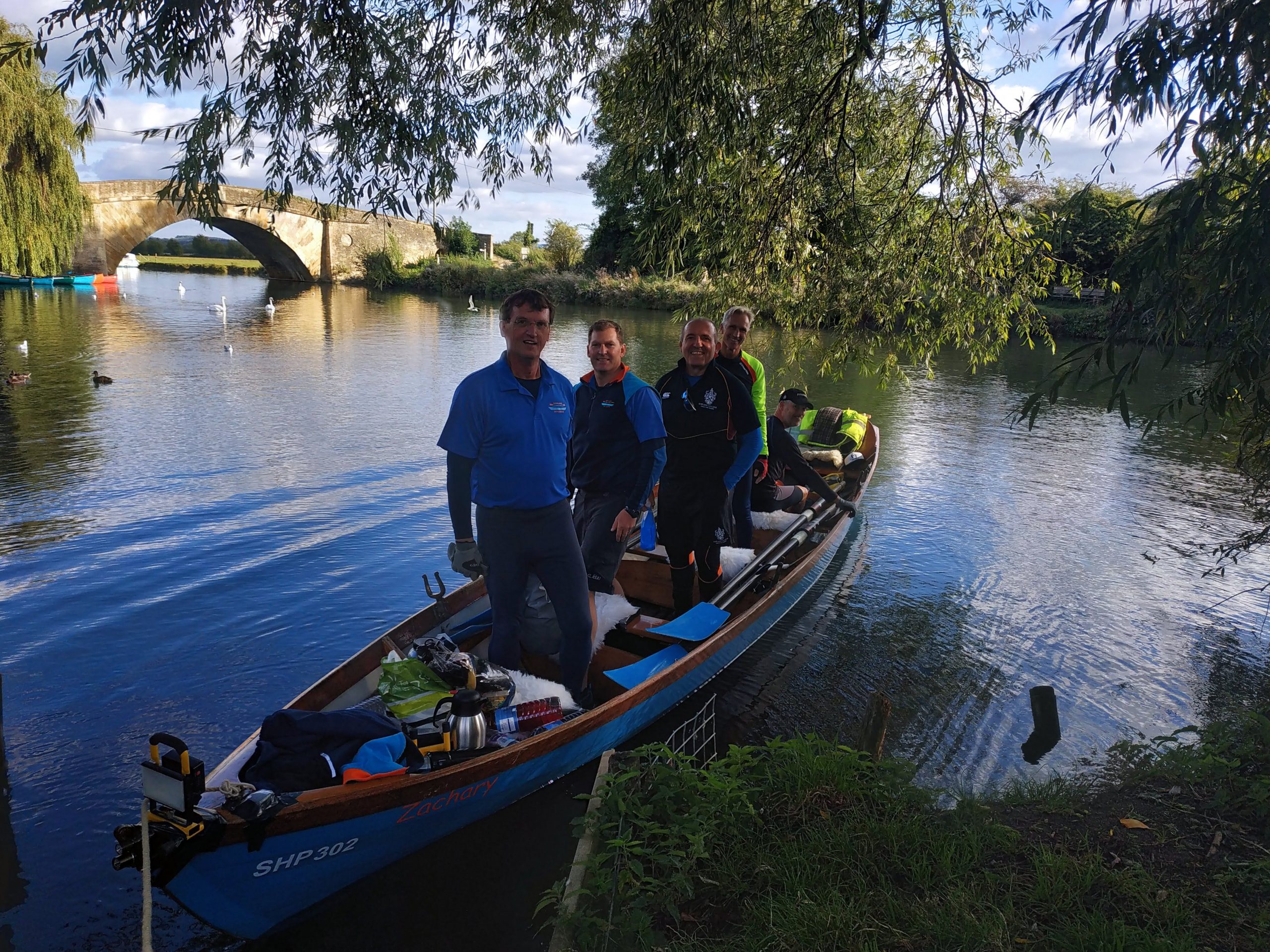 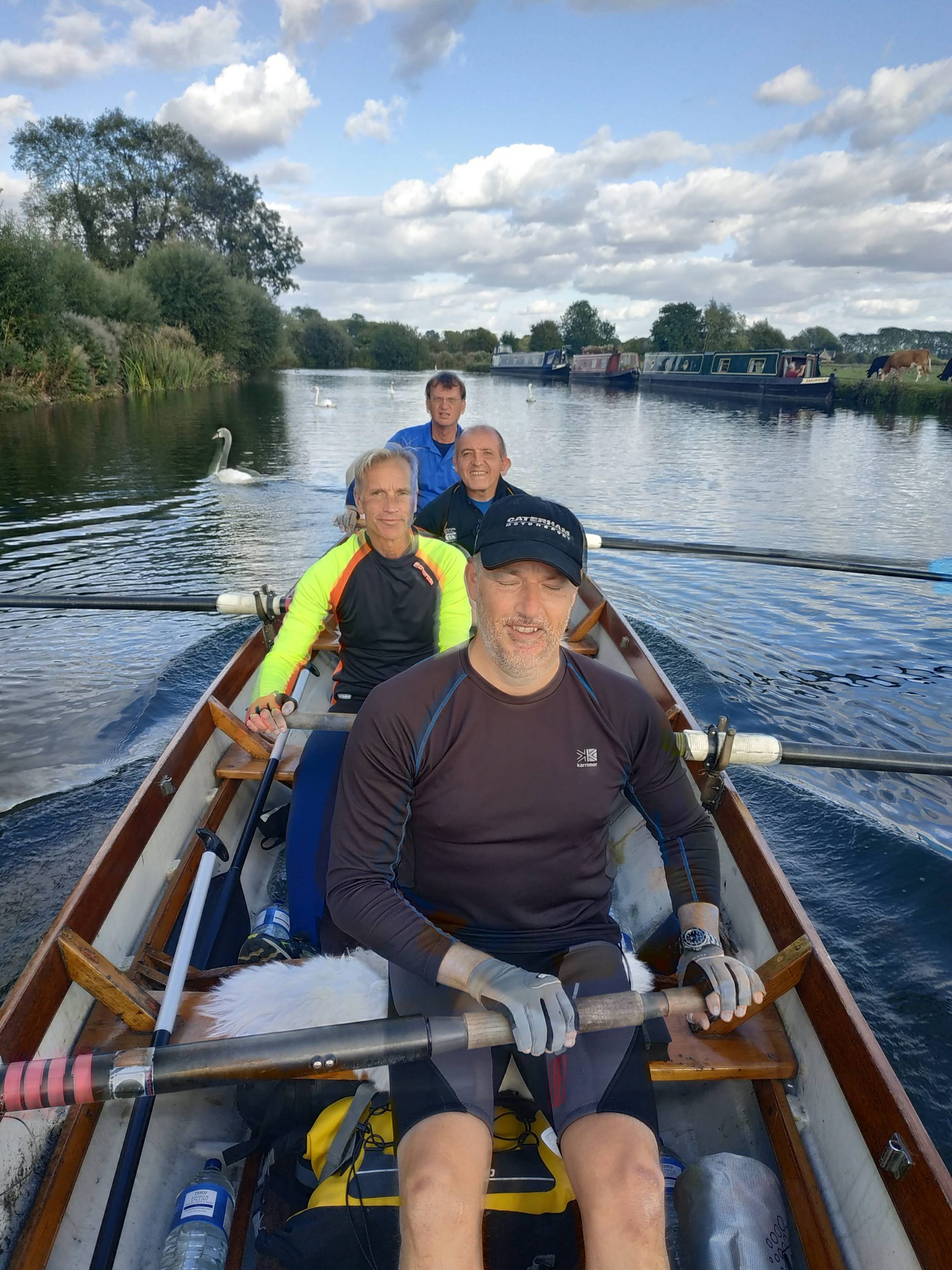 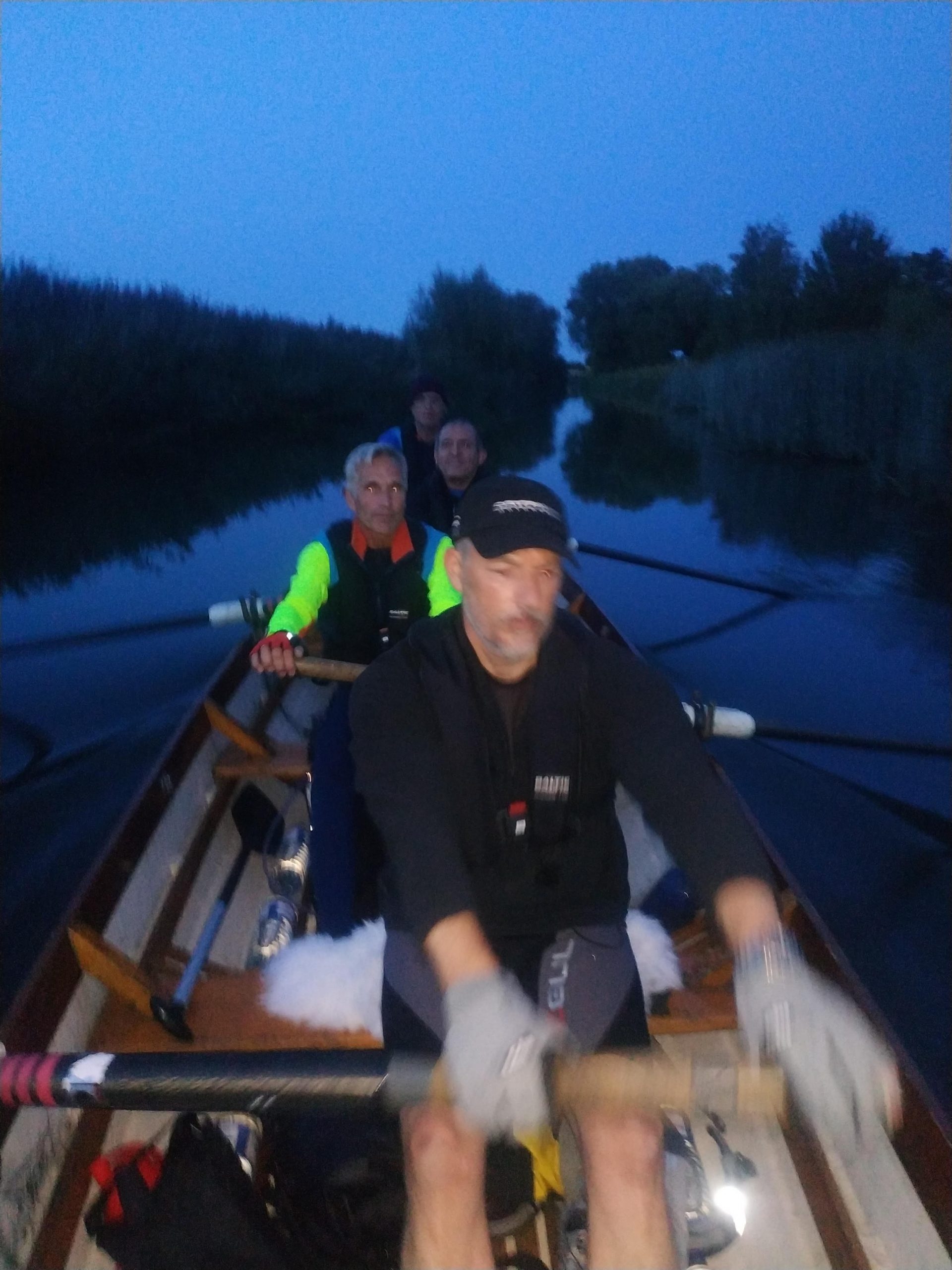 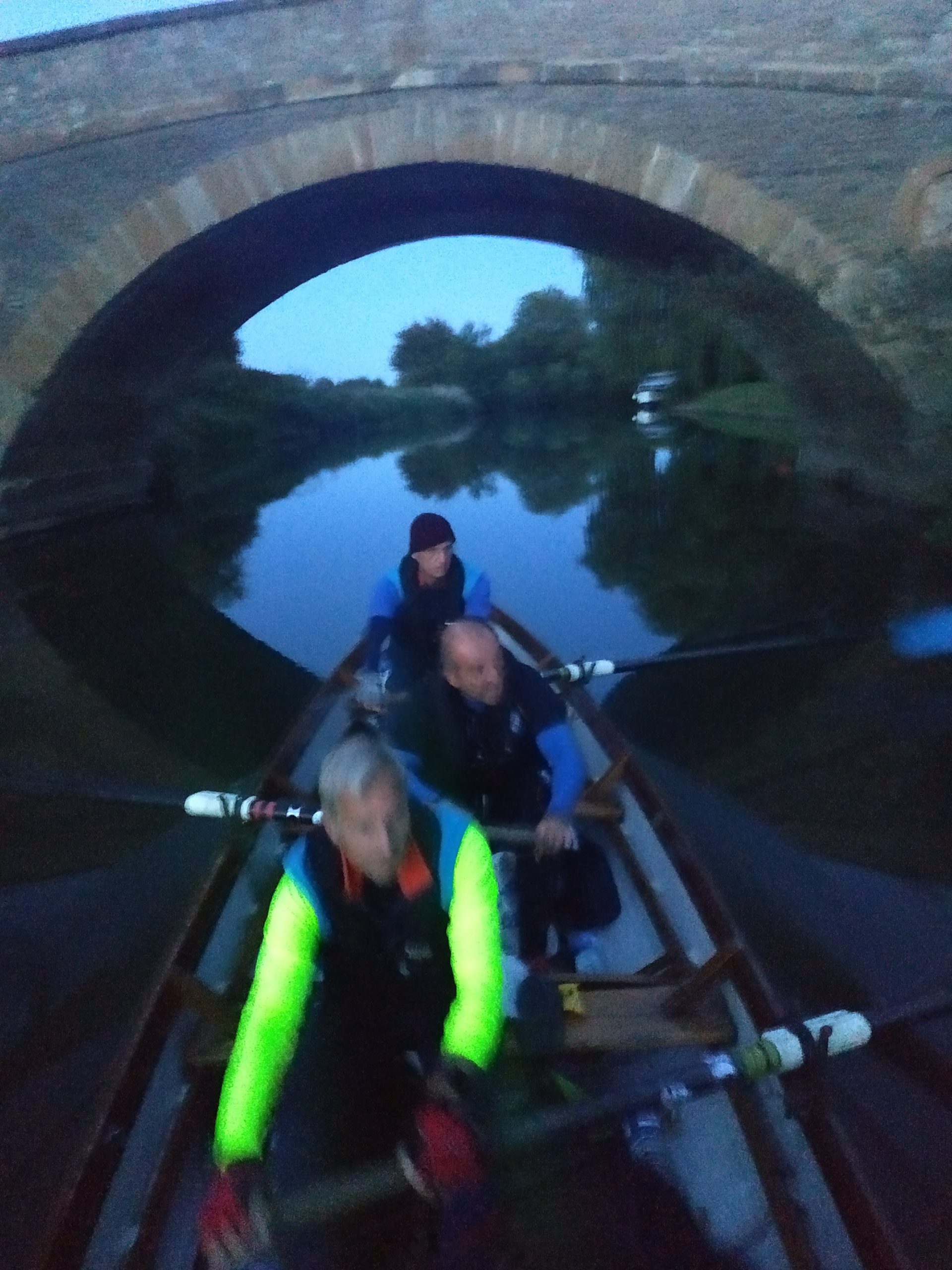 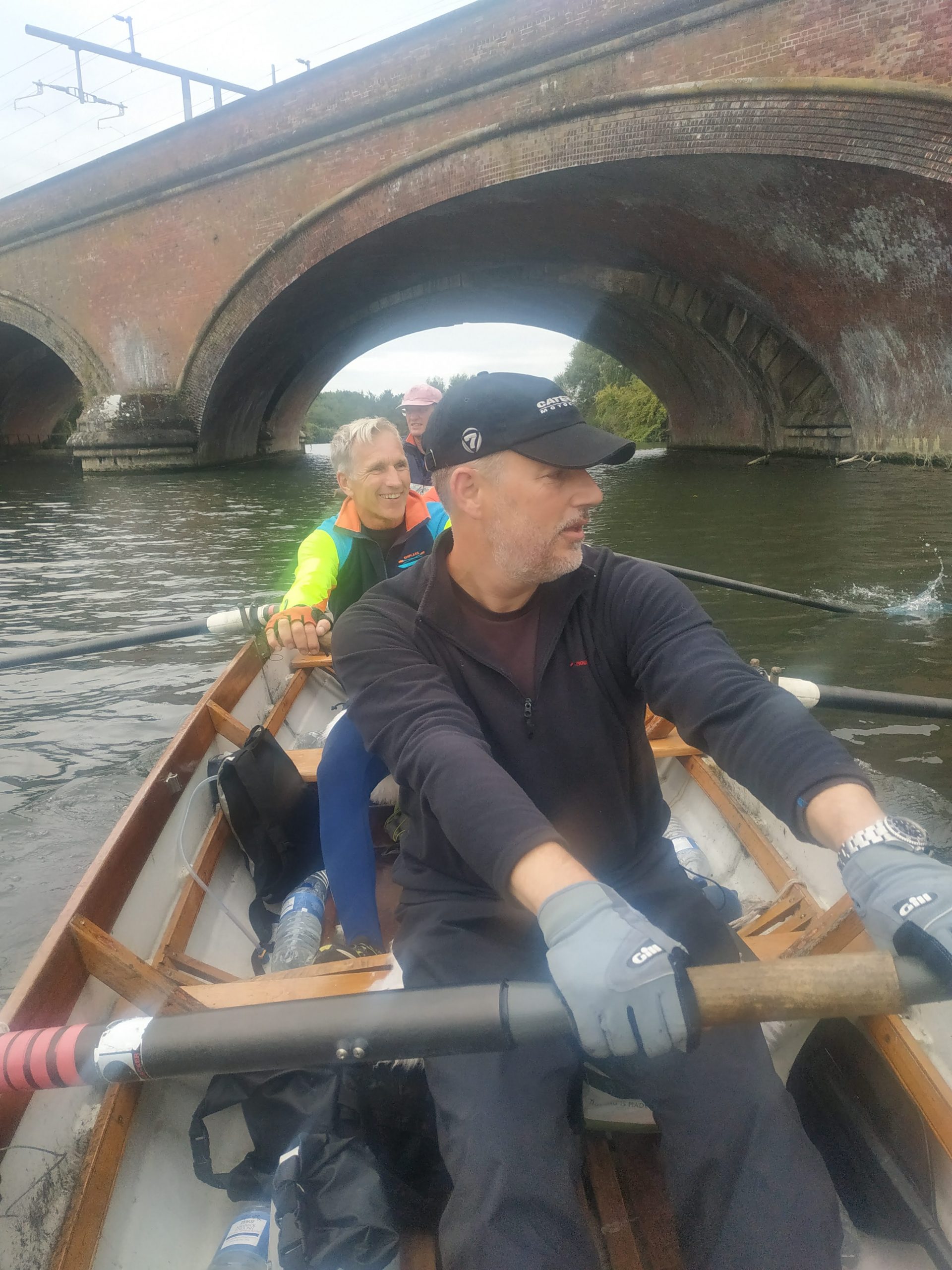 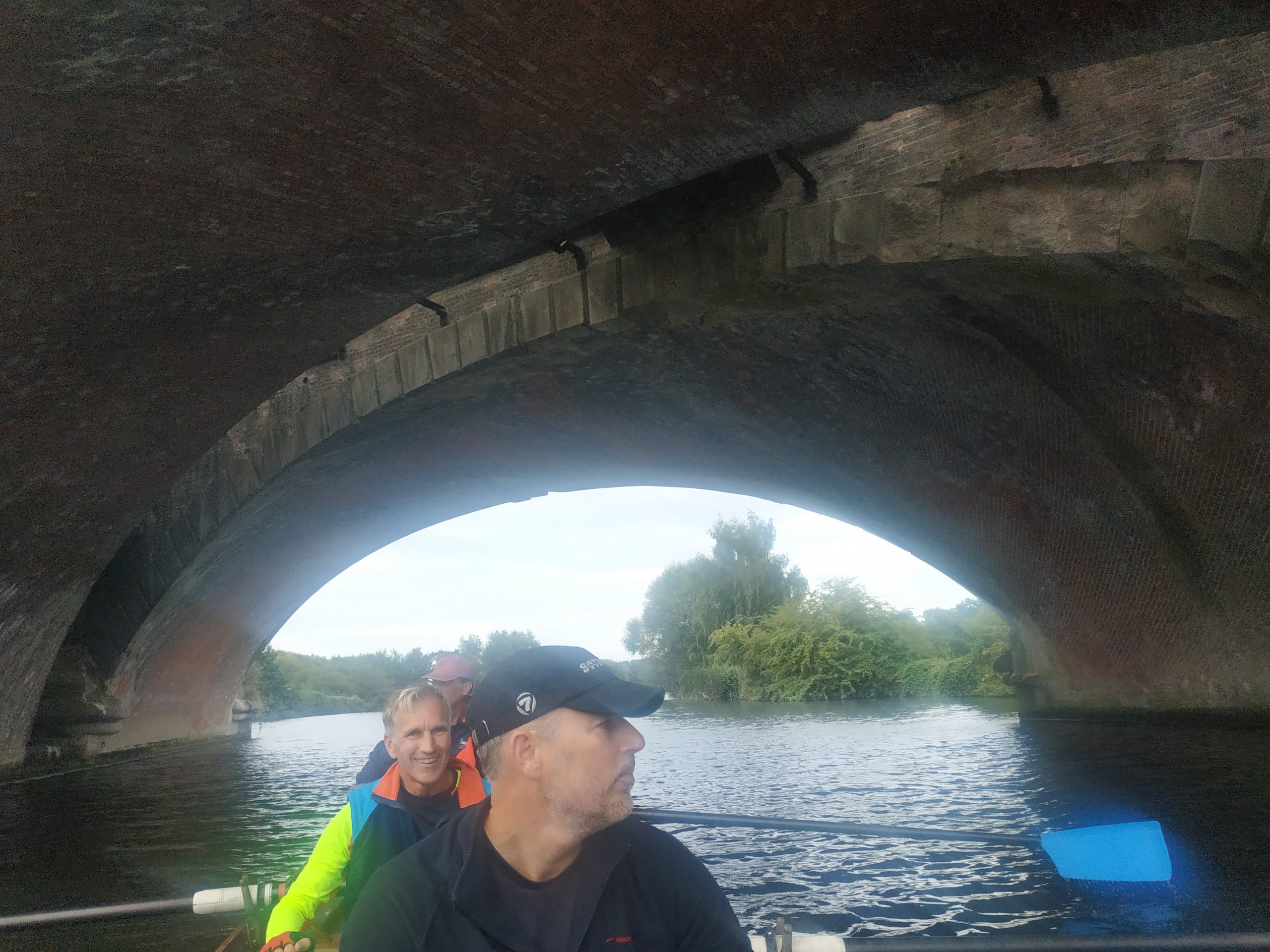 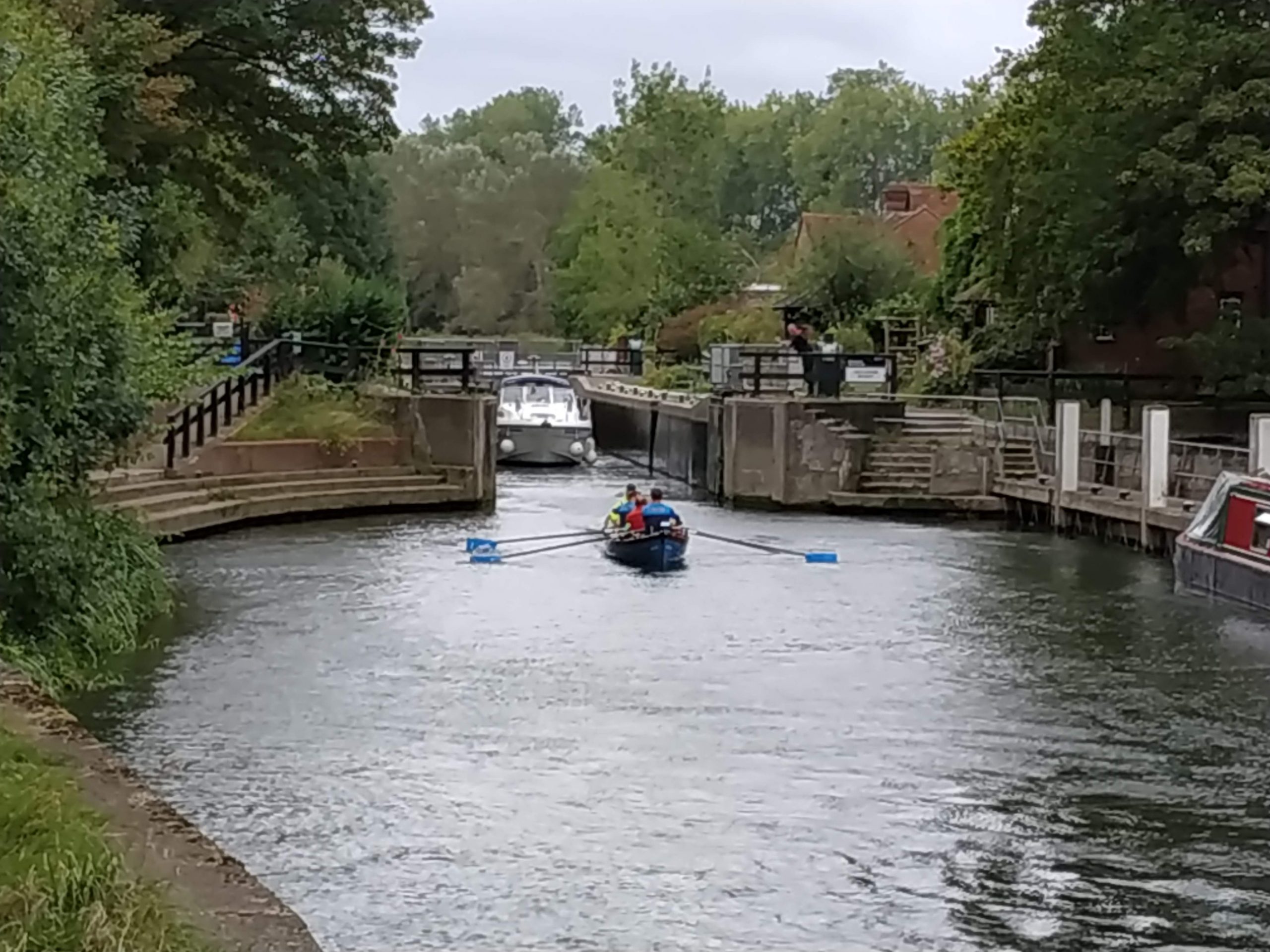 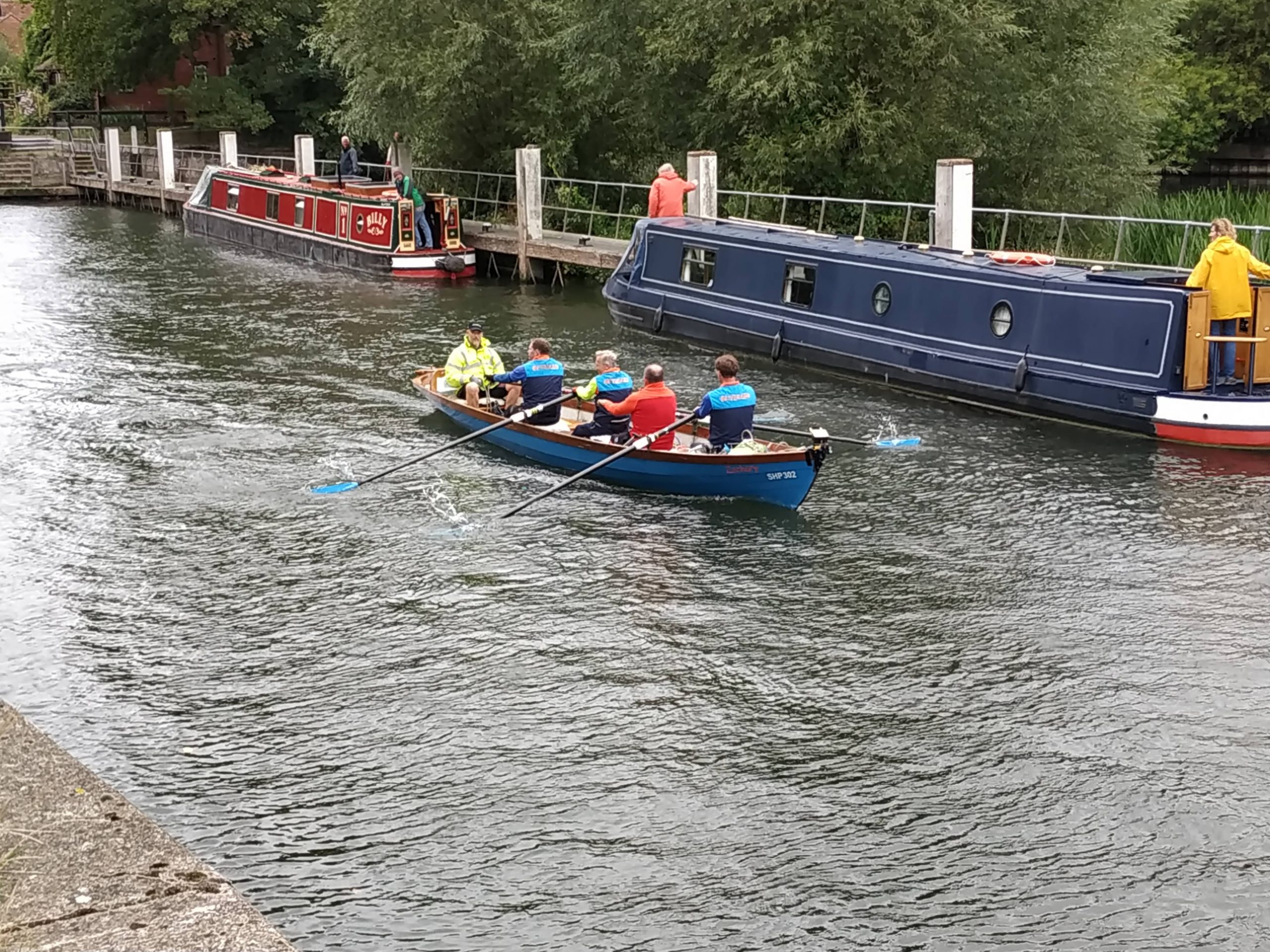 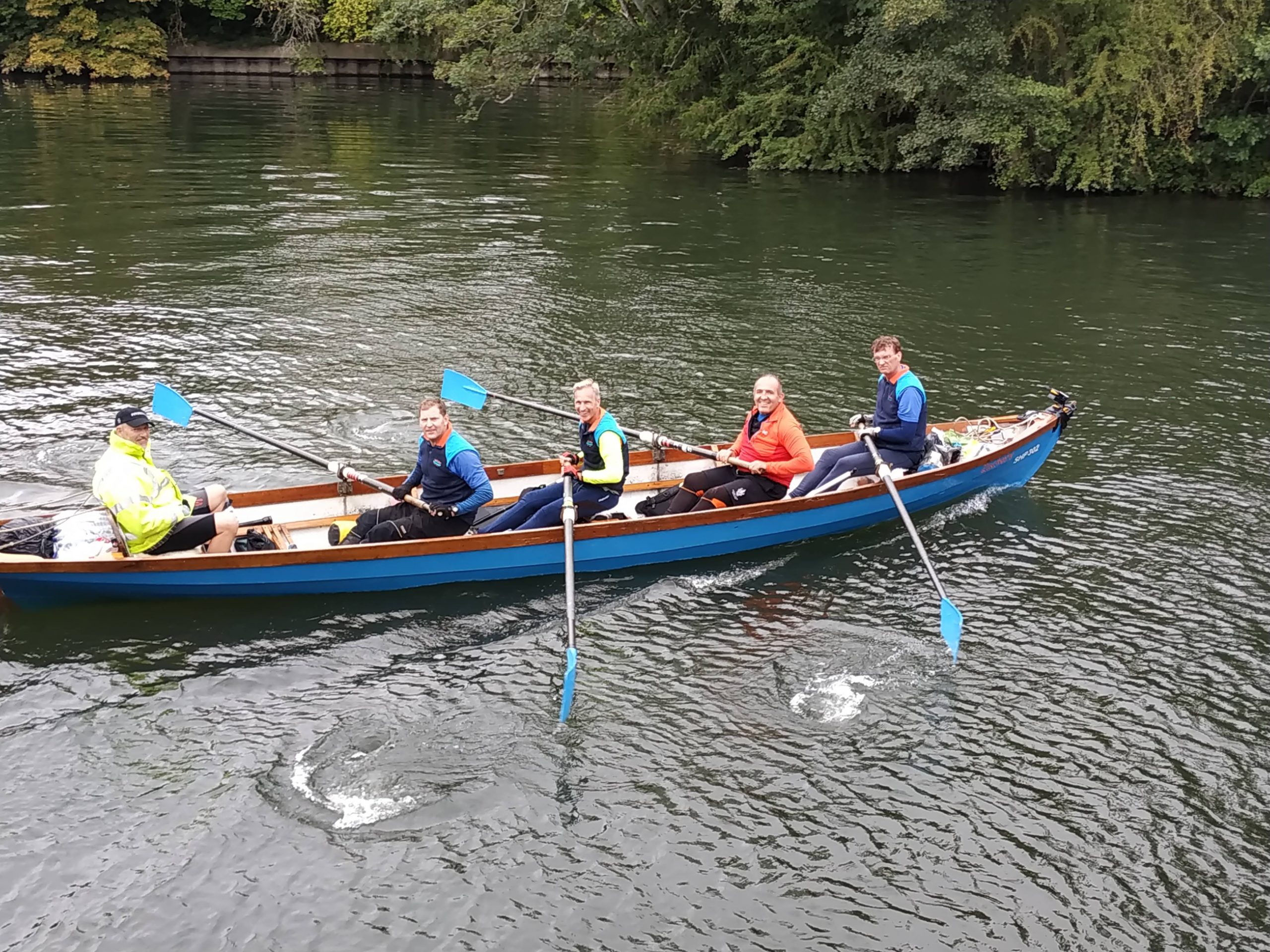 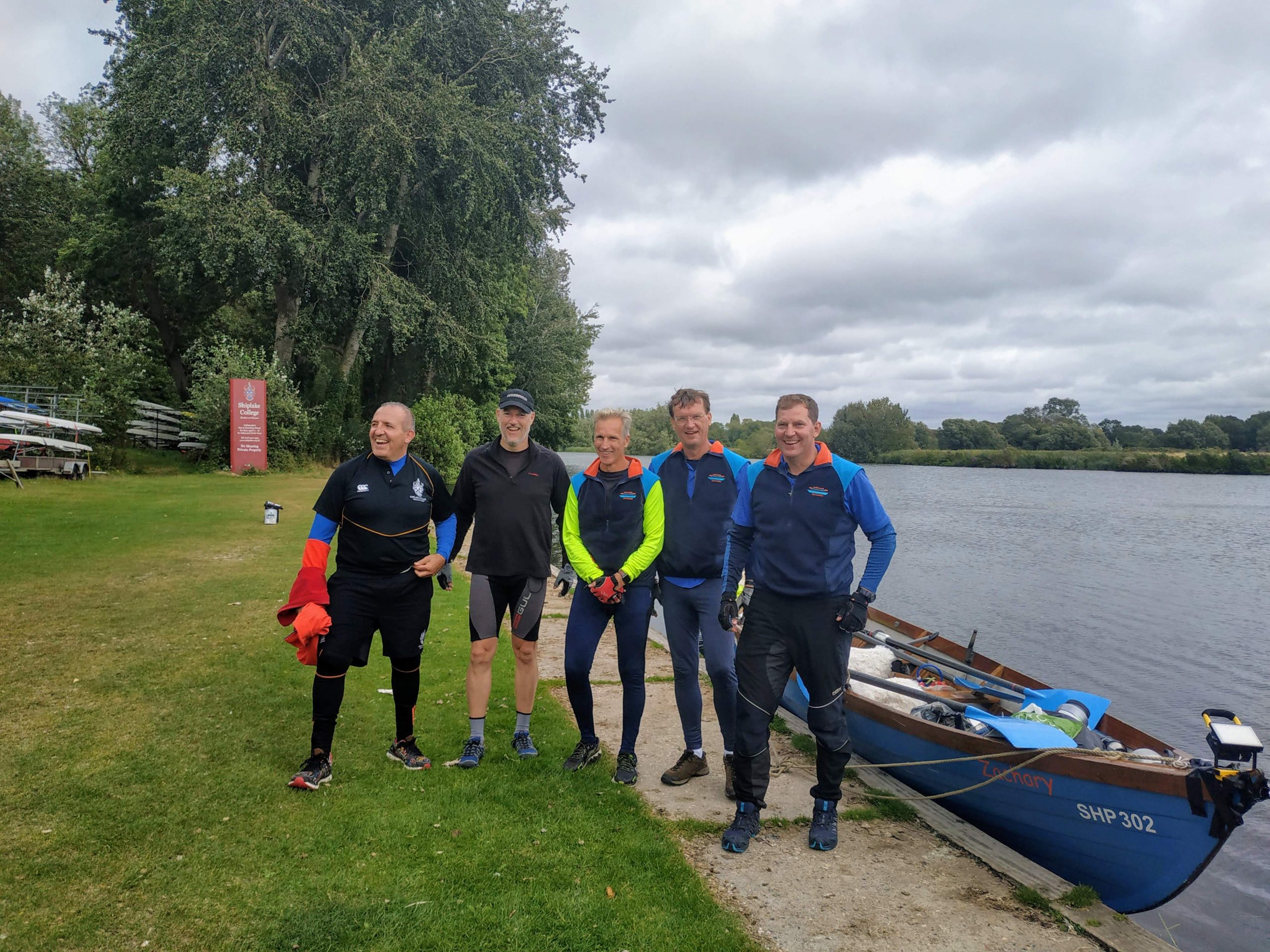 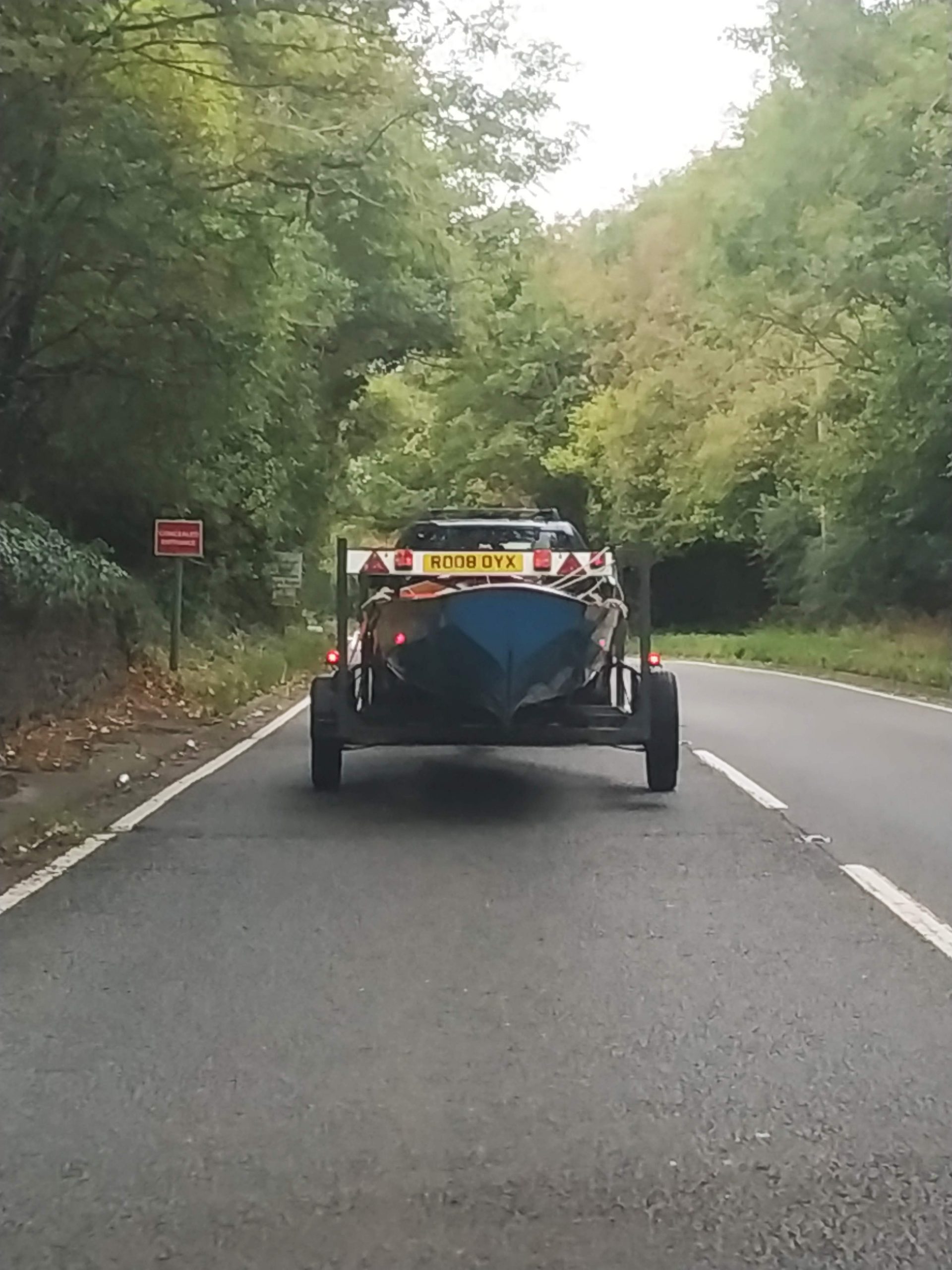 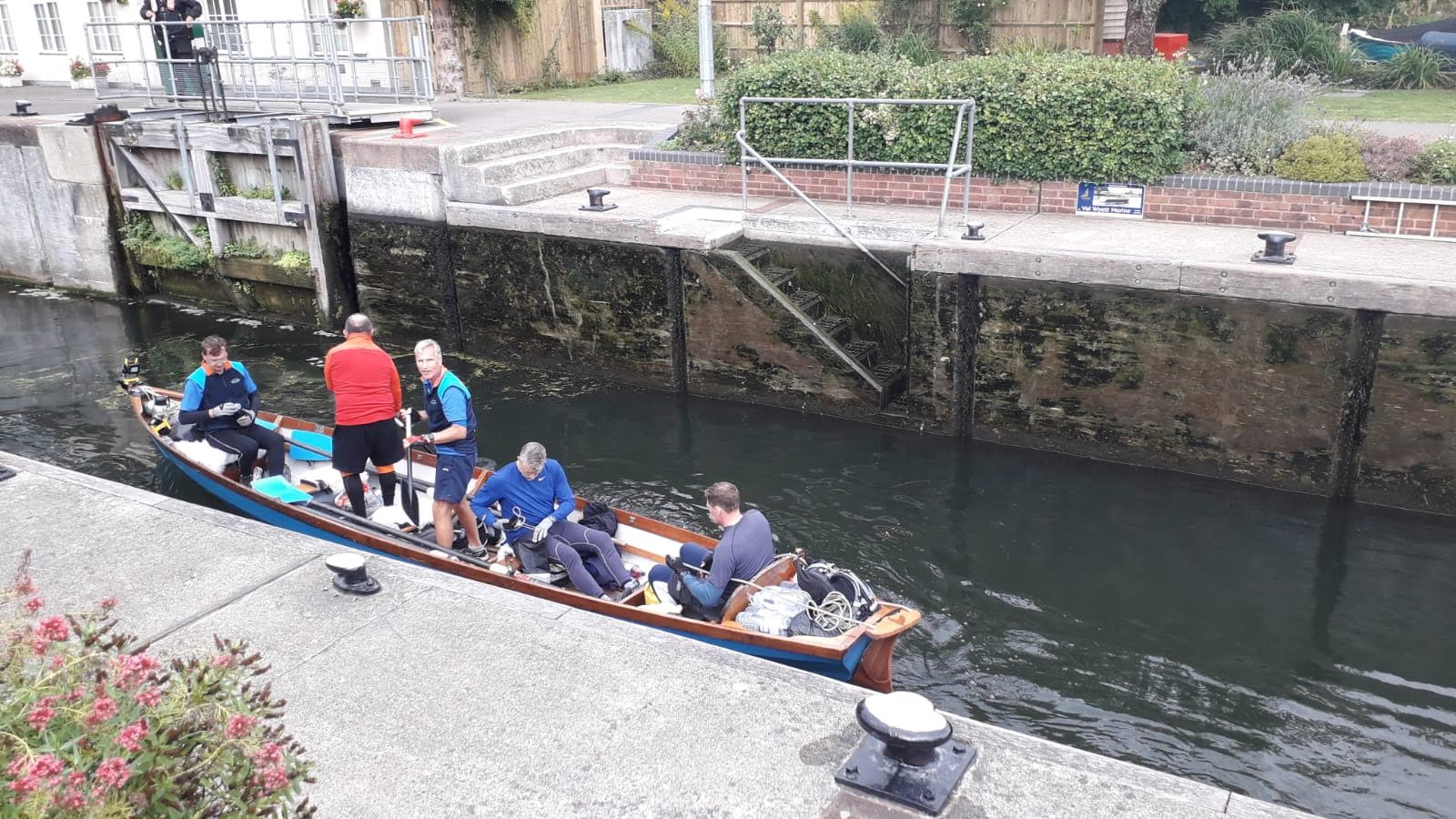 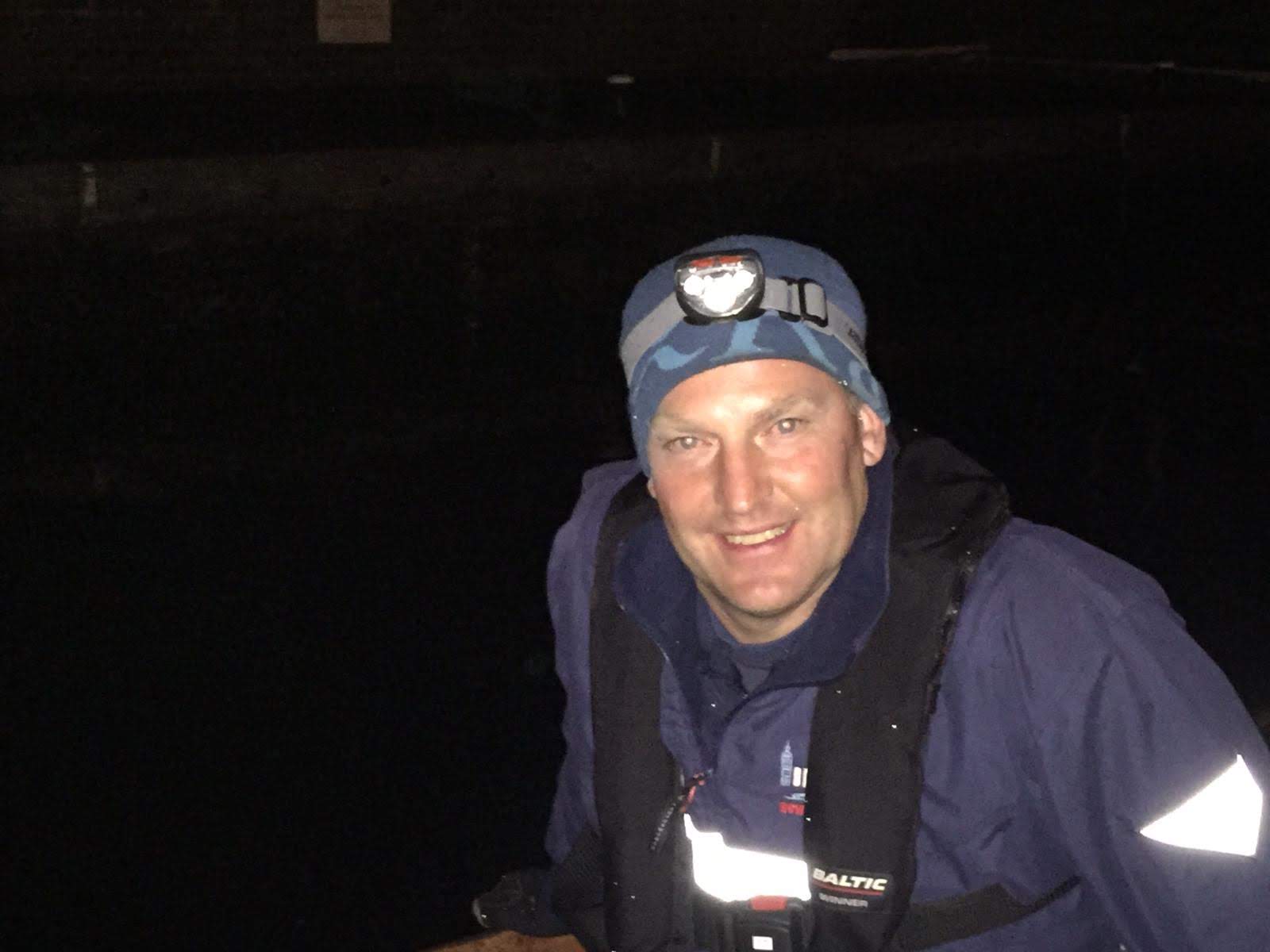 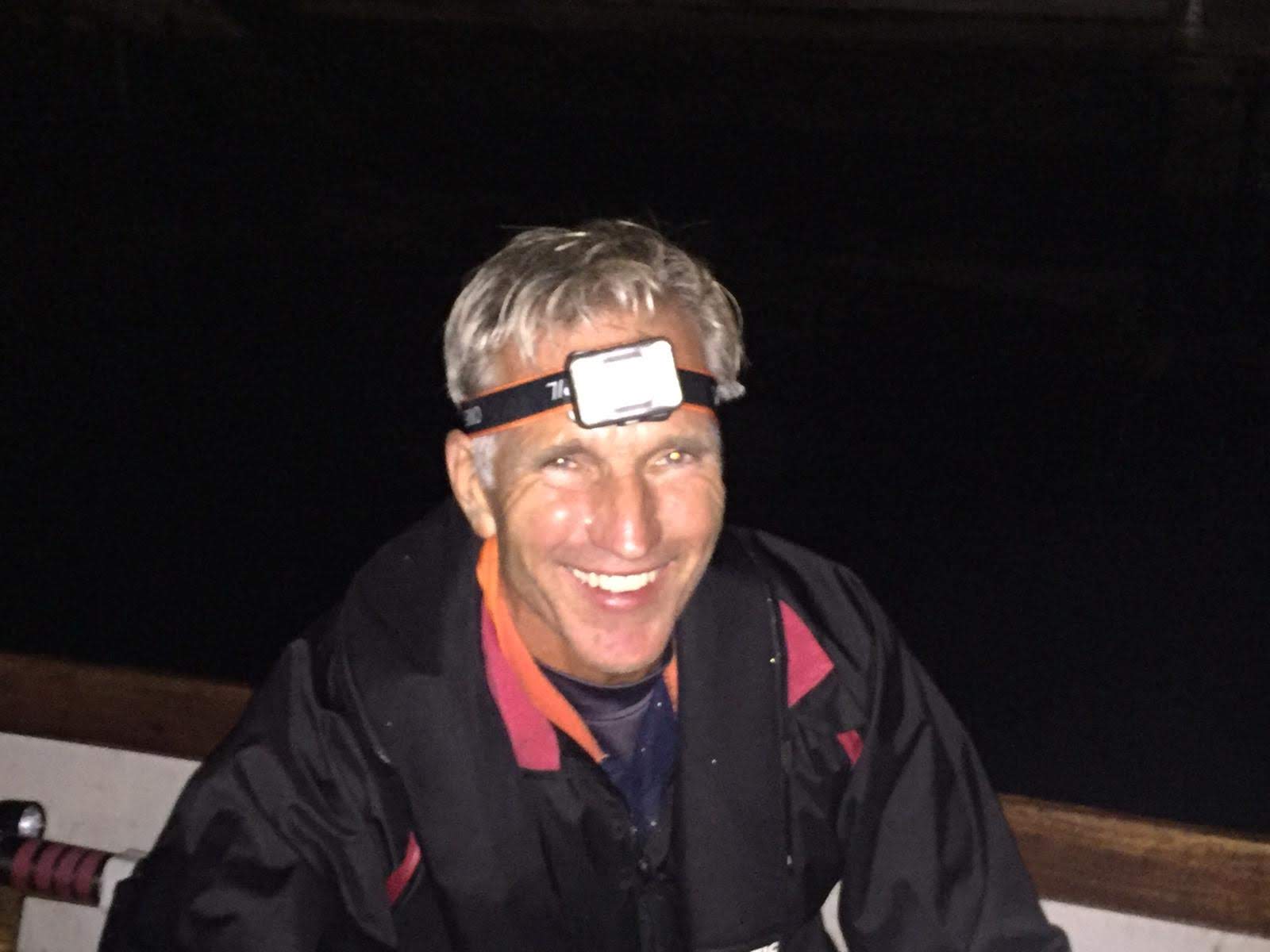 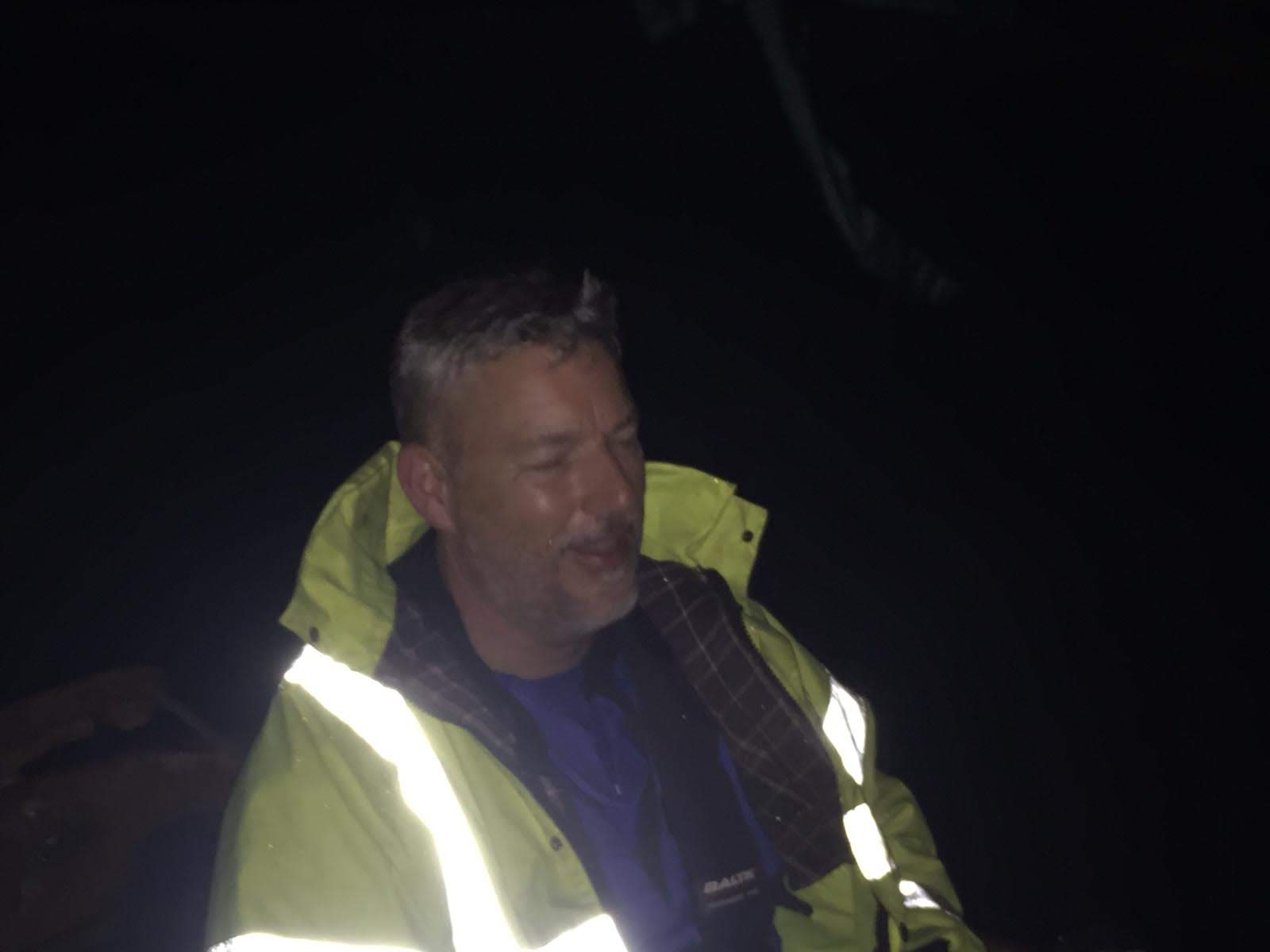 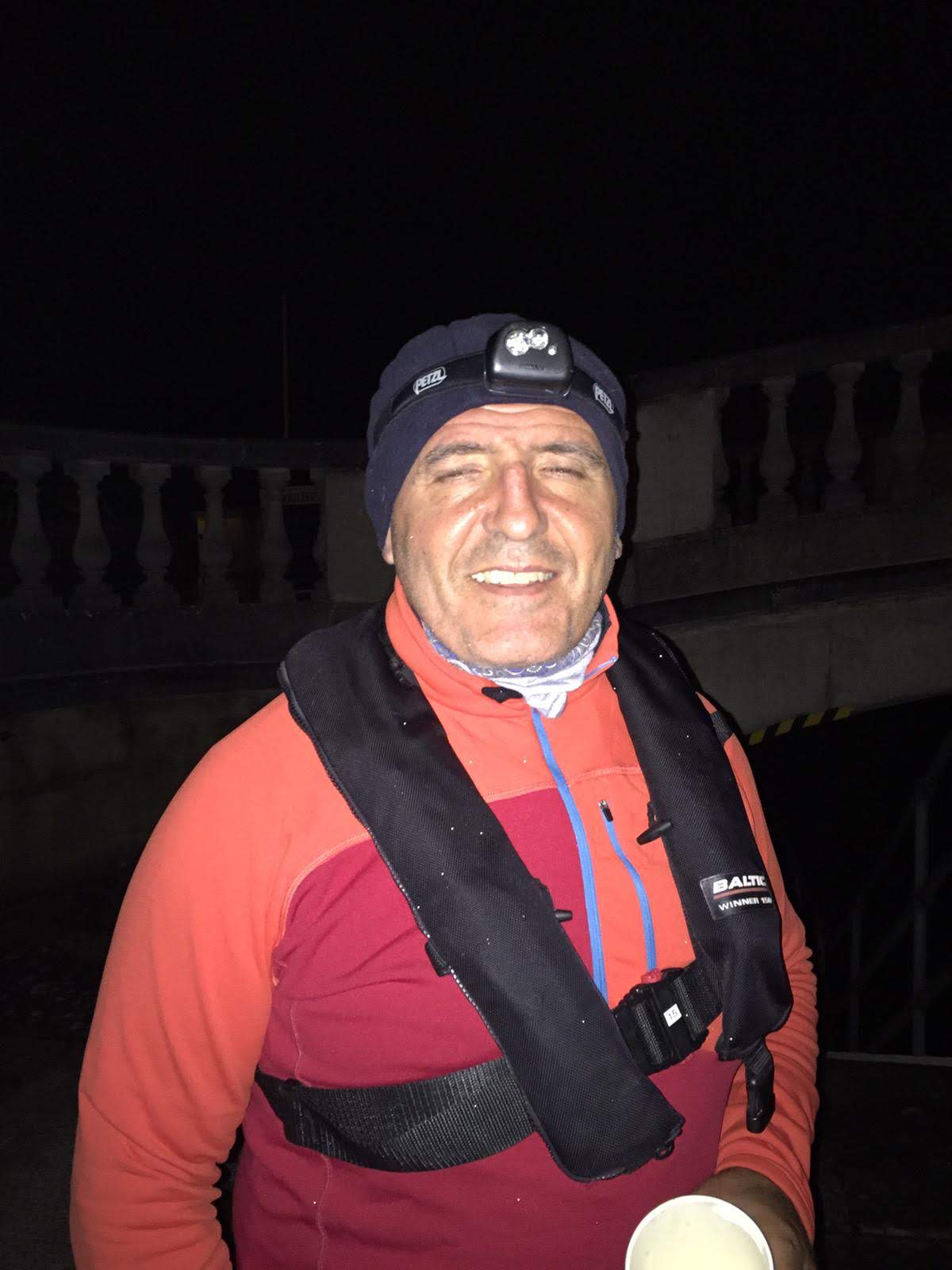 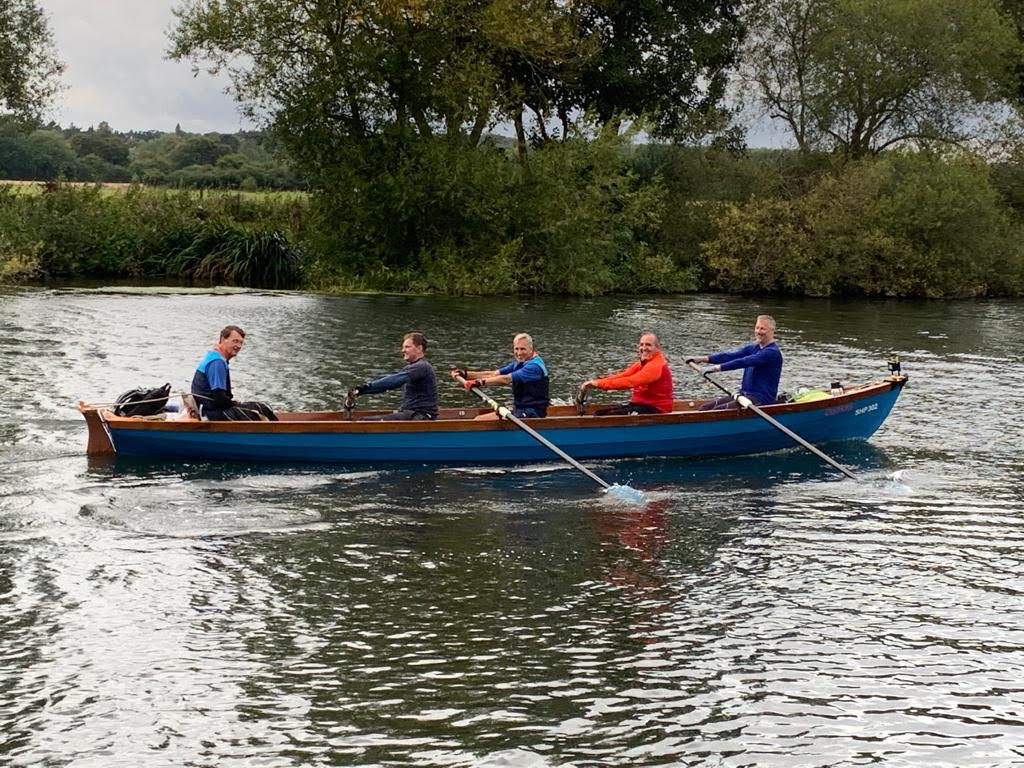 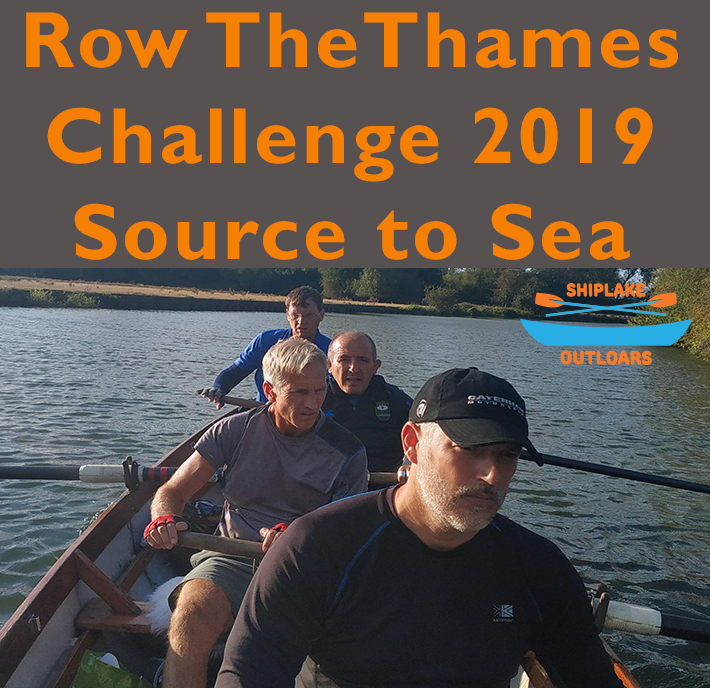 Pushing themselves to the edge of their physical and mental limits

124 miles on the non-tidal River Thames, 43 miles tidal through London out to the wide estuary past the Thames Barrier

Made up of five of the Shiplake Ouloars with an average age of 52.
Making it to the finish is not a formality

One Boat - No Sleep

Rowing a traditional fixed seat boat non-stop for neary two days and nights, the crew have to navigate carefully with no sleep.

This crew is to old  to go for any for any records – other than perhaps the eldest combined age crew to row the thames non-stop!
Simply attempting this is a monumental challenge achieved by a handful of people, and it is a challenge that could end in failure as they test their bodies and mental reserves to the maximum.

None of the crew will be sleeping for nearly two days and nights and rowing for about 36 hours each – with quick rests to stretch, administer first aid and re-fuel in the locks (about 10 minutes per lock).

Navigating the Thames at night will be a massive challenge, particularly in the narrow upper reaches and on the second evening as they get more tired.

Of course, no-one know what the elements will throw at the crew.

Keeping alert throughout the most dangerous section through the Port of London with the tide ripping through with the bridges and boats will prove to be critical and they have to pass London bridge by 10am on the Saturday in order to be given passage to the finish, past the Thames Barrier and in to the wide monotonous estuary area where navigating is a real challenge.

To their knowledge, this will be the first time anyone has rowed a Jolly boat non stop source to Sea. A handful of challengers have attempted this row in faster and sleeker boats achieving times  from 30 hours in a fine racing boat pair to 50+ hours in a single rowed boat.

The Accessible Boating (Thames) Charity uniquely specialises in helping adults and children with physical and special needs get on to the water in all kinds of specialised boats, regardless of their needs.

The charity breaks down the barriers created by society when it comes to disability and boating.

We will be raising money for the Pat Davis Memorial Bursary, in memory of Rivertime joint founder, Pat Davis – with all proceeds to the Accessible Boating Thames.

With a base at Bisham Abbey, they have helped hundreds of people to enjoy being on the water, helping with confidence and bringing equality to all.  The charity is now at a phase where they will be expanding their reach along the Thames and nationwide.

Zachary is a 4-oared fixed seat Jolly Boat – based on the cutter, a popular boat found on the Thames Estuary used for moving people and luggage to the larger ships.
Made with a GRP hull and wooden fixtures we originally rented the boat before buying in 2014.
The boat was made by a charity under the guidance of Mark Edwards – the main boat builder of the Gorianna – and subsequently neglected and left in a nuclear bunker at Upper Heyford with rats nesting in the hull.

Our crew is made up of five of the Shiplake Outloars with an average age of 52.
4 people rowing at one time rotating the cox from the 5th.
Click on the + for the crew bios. 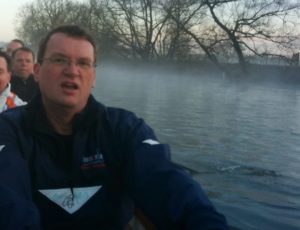 Carlton – 57 – has been involved with the water from an early age with the Sea Cadets.
He has been a keen skiffer, competing in the Ocean to City Cork race in a skiff and in more recently his jointly owned boat, Zachary.
He has completed countless Great River races, Hamble River Raids, and competed in the London to Paris rowing challenge 2010.
Carlton is on the committee at Wargrave Boating Club and the Wargrave Shiplake Regatta, where he has been a past champion and regularly  competes in a skiff, punt and dongler. 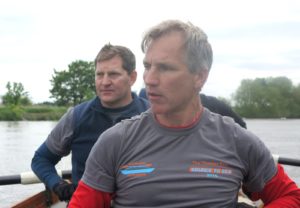 Stuart – 56 – has to be our keenest ‘Outloar’ undoubtedly notching up the most outings over the years.  When he joined us six years ago, Stuart had never rowed a boat and he immediately took to the sport.
He took part in the 2016 Thames row completing 2 days, has competed in the Great  River Race and numerous Hamble River Raids.
It is hoped that Stuart’s ability to survive on virtually no sleep will hold him in good stead for the event. 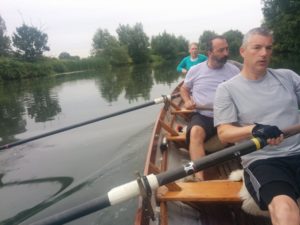 Steve – 49 – has been a member of the Outloars from near the beginning in 2014 and is no stranger to endurance sports having completed the Devises to Westminster canoe race in brutal conditions in 2013, competed with the Outloars in the Great River Race and is a regular skiffer at Wargrave Shiplake Regatta. 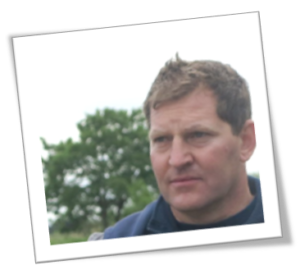 Guy – 46 – is joint owner of Zachary and founderof the Shiplake Outloars and has been fixed seat rowing for 9 years.
In 2010 he was in the same crew as Carlton that rowed from London to Paris.  Guy has competed in numerous Great River Race’s, the Ocean to City – Cork, and was in the 2016 Thames Row.
He has built his own skiff, owns Moose Canoe Hire, SUP Hire UK and has volunteered and fundraised for the Rivertime Boat Trust for 9 years years and is part of the development team at the Accessible Boating Charity. 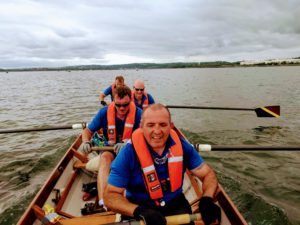 Yona – 50 – has the sea in his blood having been brought up near the coast in the Basque Country, with a nautical background.
As an ex-international prop forward, Yona brings plenty of power and calmness to the boat and a metronomic stroke rate.
He has taken part in the Great River Race, Ocean to City and Hamble River Raid and is a keen addition to the Outloars.
Yona is a housemaster at Shiplake College and hopes to get some great support from the School as he rows past.

Or if you prefer:

About the Accessible Boating Thames Charity

The Accessible Boating Charity was newly formed in 2018 to deliver specialist boating facilitiies for people with disabilities and special needs.
The local activities of the charity were formally run through the award winning Rivertime Boat Trust Charity.
The new charity will continue to operate on the River Thames and will also be expanding nationally, as it seeks partners to replicate its expertise.
The charity relies fully on volunteers to run the general operations, other than specialist watercraft experts for its events which it contracts in.

The charity is currently actively fundraising to provide boating days for SEN school children in 2020 which costs £1,000 per day for up to 60 children, and to run another Regatta at Bisham Abbey for 350 children to participate in various water sports and activities for a day. 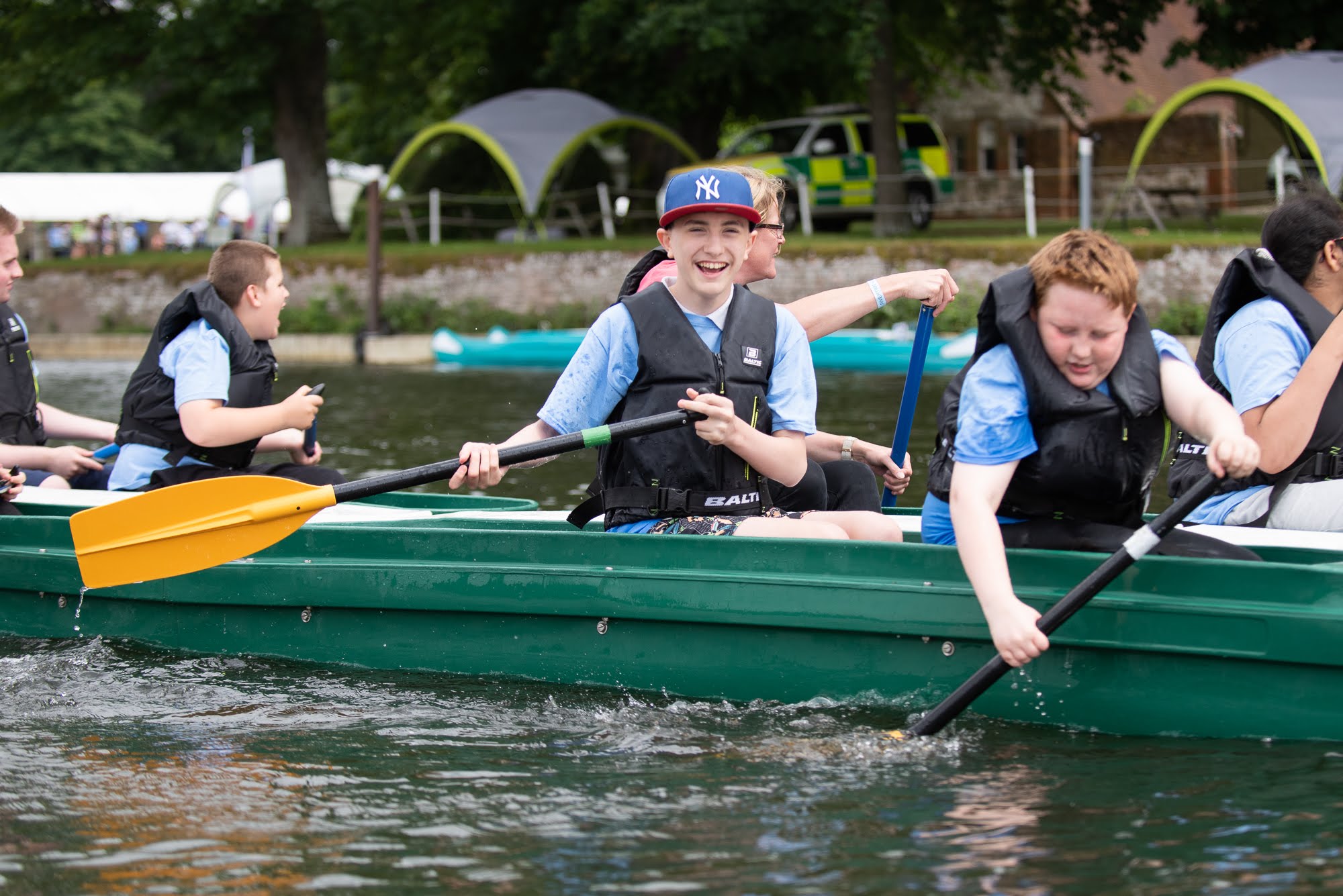 Thank You to Our Sponsors

Canoe and Stand Up Paddle Board Rental on the river Thames from their exclusive base at Bisham Abbey – Marlow & all along the River Thames.  www.moosecanoehire.com

Bisham Abbey Sailing and Navigation School – RYA Training Centre on the river Thames – who provided us with some much needed technical kit. http://bishamabbeysailing.co.uk/

Would you like to Sponsor Us in some way, help with land support or just get in contact?